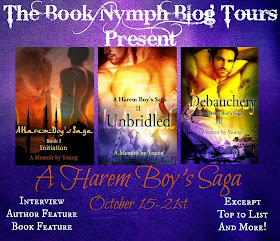 This provocative story is about an adolescent who was initiated into a clandestine sexual society. He was spirited to the Middle East, from his UK boarding school. He attended the Bahriji School (Oasis,) in The United Arab Emirates in preparation for serving in Harems for the wealthy and elite. It is also a love story between the young man and his ‘Valet’ who served as his chaperone and mentor during the boy’s Harem service.

Author’s note: I had a privileged and unique upbringing in Malaysia. Following in my brothers' footsteps, I was sent to an exclusive boarding school in England. It is there that 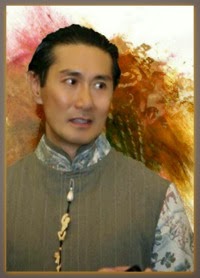 I was inducted into a clandestine organization, E.R.O.S. The Enlightened Royal Oracle Society. For four years, unbeknownst to my family, I was willingly and happily part of a Harem. My story has been kept under wraps for close to 45 years. The correct moment has arrived for me to make known my unique education.

This review is from: Initiation (A Harem Boy's Saga Book 1) (Kindle Edition)
Never have I read a story that has me exclaiming "OMG, OMG, OMG" every few chapters. This autobiographical story shares the intensely personal journey of a young boy as he comes of age in the midst of a male harem in the middle east. He experiences all the things that forbidden and taboo...you know those "unmentionable elephants in the room" that we are warned about from an early age. I had to read this real life adventure to find out how messed up and damaged he must be. Imagine my surprise to meet an emotionally healthy young man who successfully grabs all life has to offer and does it with an innocence that is simply beautiful.

5.0 out of 5 stars Elegant and Erotic Tale,
By
mlm "Mel" (MO)
This review is from: Initiation (A Harem Boy's Saga Book 1) (Kindle Edition)
To say this was a “good” story simply doesn’t do it justice. This is the true tale of a male Courtesan. Or, as the author puts it – A Harem boy. It begins with his life in Malaya as a small child. The honesty and self awareness he had is astounding. I laughed a bit when he called himself a “Sissy boy”. But then he reclaimed that title and I found that he was quite proud of who he was. The toss of the coin by the Gods created a delicate and beautiful soul who was wise beyond his years – at least regarding his own self. His mother captivated me from the beginning. She doted on her youngest son and allowed him to be who he was. I believe it was her unconditional love that helped shape this adventurous and self-aware boy into a man who obviously, and rightly, loves himself. His relationship with his father, although forced and quite what one would expect, wasn’t as bad as it could have been (Happy to read that. At times I feared the worst.). Starting by learning all about his privileged upbringing in a romantic time helped me understand who and what he came from – and in turn – helped me to see the rest of the story from his eyes. I wanted the same things he did and I felt his relief and desperation to leave for boarding school in the UK. From here, our delicate “Sissy Boy” is initiated into the clandestine society E.R.O.S.


I’ll let the reader get the full story on how that happened. I will say – he was brave, and perhaps a bit naive. But his childlike trust was not misplaced and he was off on an erotic, and sensual adventure to the Middle East. This is where I truly fell in love with this tale. I felt as if I was reading Arabian Nights and seeing what really happened in the Kosk of a wealthy Middle Eastern man. The world he experienced was lush and opulent – as was the sex. The sexual stories are not graphic in the way one might think. You “see” what you must and, I think, the beloved author still has a few secrets from those times. However, from the fantastical tales he tells, his initiation was beyond the imagination of any young boy of the times. He’s whisked away to Italy, Tunisia, and Paris (among other places). At his young age, he experienced multiple lifetimes.


As I read the story, I realized this wasn’t simply a naughty tale of his escapades as a teenager. It was a love story. There were so many different kinds of love experienced! From his first “puppy love” experience to very real and deeply felt love that the reader watches blossom, we watch him learn what love is – to him. I also realized, halfway through, this was a love story about himself as well. The author has accepted all of his past and accepted himself in the process. He fell in love with himself and it was beautiful to see. A young, gay teenager who could have easily buckled under the pressure of society and his father to hate himself persevered and chose to walk in love in all that he did. That amazes me. His descriptions are lush and makes the reader yearn to be there, to feel the fabrics, to smell the smells, to taste the food and to see the expressions of love.
I will give a word of caution about this book – It was a mental hurdle from the beginning to overcome my assumptions and modern judgment of sex by/with/to a minor. After getting about 200 pages in, I set it aside to think about how I was feeling. I realized a few things – this wasn’t an American story. I had to remove my American glasses as I read this and understand it was a tale from a different land and a different time. I also began to understand the vast difference in social and economic classes. His life of privilege allowed many of his sexual proclivities to be accepted and, as in the school in the UK, pushed to new limits. This story has made me wonder about the wealthy classes of people and what other traditions we laypeople know nothing about. Fascinating. As equally fascinating as the inner working of the Muslim homes. Oh, what I wouldn’t give to be transported to such a place. If you can separate your modern, American point of view, and read this story for what it is – you will love it. Much like readers of Anne Rice’s SLEEPING BEAUTY series, this has the same “feel” to it. If you enjoyed that, you will enjoy this as well. I’m a straight woman who doesn’t make a habit of reading homoerotic stories. To each his own, right? But this, this was so much more than just sex confessions. A unique coming of age tale that is beautiful, daring, and provocative. Bravo Young! 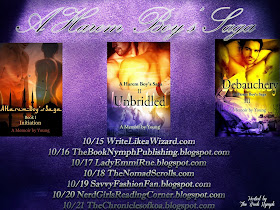